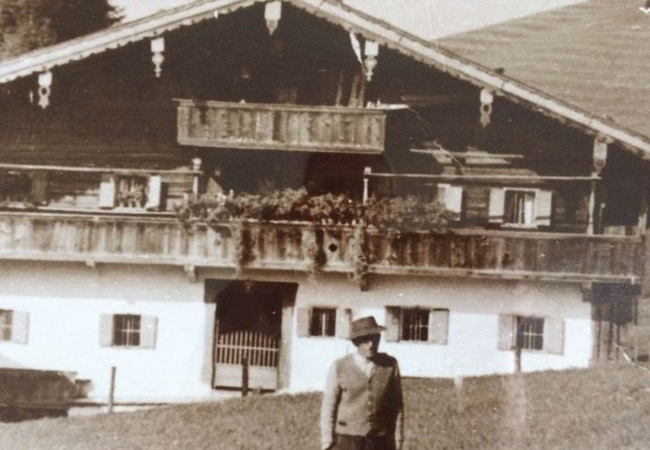 The roots of the family Haselsberger go back till 1897. Christian Haselsberger born in 1852 in Scheffau in the Wilder Kaiser acquired with his wife Christina and 3 sons the hof Gasteig in St. Johann in Tyrol - at that time Hinerkaiserweg 7 with approx. 8 hectares of bases and forest surfaces. They pursued a milk breeding company.

2rd Generation
In 1930 he handed over the hof Gasteig to his 2. oldest sons Georg Haselsberger, because the first born son Christian was seriously wounded in the First World War and died later on the following. Georg Haselsberger was also during the First and Second World War and some years in Russian captivity. After his release he came home and married Anna Lackner and with her they had 2 children, George and Anna Haselsberger.
In 1948 his wife Anna suddenly passed away at the age of 51 years.
In the autumn of 1971 the Hof Gasteig burnt down completely. This incident shaped the whole family very much.

3rd Generation
In 1971, the agricultural sector, including the ruin, was transferred to Georg Haselsberger jun. to hand over.
In 8 years of painstaking and difficult construction, with a lot of self-help and with the support of his wife Klara, he had married in 1966 - they built the B&B Pension and a stable building with the vision of the small agriculture to create a viable enterprise. They have 3 sons, Georg, Helmut and Peter.
The B&B Pension could never be finished by some private circumstances, unfortunately and be opened.

4rd Generation
In 2011 he handed over his Hof Gasteig to his youngest son, Peter. He built the breastfeeding B&B Pension and opened with his wife Monika in December 2012 - after 33 years of standstill. In May 2016 animals moved to the Hof Gasteig. No milk cows as before. Peter decided to take care of roe deers & deer. He built the game and bought a deer and 11 roe deer in Styria. He is passionate about his deers breeding. From 2018 onwards you can buy organic wild meat from the farm.
Peter and Monika have 2 sons, Stephan & Tobias. They are the 5 generation.

To sell deer meat from the farm

now you can buy the biology wild meat and the improved wild meat products & taste.
We are glad about your inquiry: